Office 2013 simply decided to stop working one day, leaving me with a Office document and a Excel file i urgently needed to access and edit.
What to do?

Uninstall Microsoft Office 2013 wasn’t possible as the uninstaller complained about “Click To Run” which was left at the system and was some sort of
virtualisation or installer system for Office.

As i tried to repair Office with the Online Repair option and the Quick Repair, it simply ended with an error.

Then i tried “Microsoft Office 2013 Fixit utility” which wasn’t working at all. Instead of uninistalling Office, it ended up with the error “ClickToRun is installed”.

Well, there was no ClickToRun to uninstall, so i went for help of WICU Windows Installer Cleanup Utility and uninstalled every leftover of Office and
ClickToRun.

Reinstall again… now it started installing and froze after a few seconds. Perfect…

I tried Office 2013 Installer Fix which offers two buttons for help. One is to be pressed before installing (cleans up all Office leftovers and ClickToRun) and
one is to be pressed when office hangs on 20% 74% 98% or anywhere else, which it did on my second try.

I had the Office 2013 edition which comes with a digital download and therefore is installed with ClickToRun… I don’t know if this tool fixes
the edition which is bought in a store with a physical CD or DVD, but i guess it will or if not, then they will implement it soon.

Wow, that worked, and i was finally able to install Office 2013 again, after so many tries and so many fixes, i’ve found the final remedy to
all that pesky Office Installer/Uninstaller bugs. 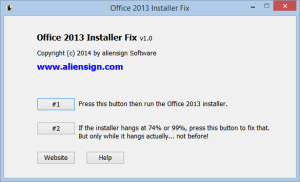